a: a word or phrase that constitutes the distinctive designation of a person or thing;

b: a word or symbol used to designate an entity

The name of a coastal Greek town, Astyra was conquered by Alexander the Great and pressed into service by Alexander to produce bronze and silver coins. Astyra was significant because its coinage would be used by Alexander as the single unit of monetary exchange throughout his entire empire – in other words, all money would be created by and outsourced from Astyra. Therefore, it is a fitting name for a company whose brand is emblematic of its specialty – the outsourcing of a multitude of business and technology applications. Astyra Greek coinage is very rare and considered to be some of the finest made examples of the period.  The Astyra staff purchased one of the original coins and presented it to founders Ken Ampy and Sam Young. 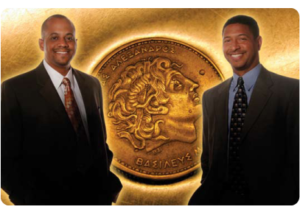